By Audrey Overstreet
For 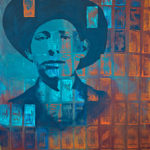 The Spokesman-Review
Something old, something new. It’s a common formula for selecting music for concerts by classical ensembles.

For the first time in its 37-year history, the SSQ will perform works by an American Indian composer. Make that four composers – Katie Barrick, Dylan Bennett, Miko Begaye, and John McAlester – all from the Chickasaw Nation in Oklahoma.

Not only are all of these young Chickasaw composers still living (dead Europeans are more typical with classical music), they were all students when they wrote their compositions.

Quartet violinist Howard-Phillips discovered the contemporary works about a year ago while searching for new music. She first contacted the renowned American Indian composer Jerod Tate to see if he had anything for string quartets. (Tate’s composition “Iholba’ ” was recorded by the San Francisco Symphony in 2008, marking the first time the SF Symphony chorus had sung any work in Chickasaw or in any American Indian language.)

Tate told Howard-Phillips that he did not have anything for the quartet personally. Instead he pointed her in a different direction.

The Emmy-winning composer sent her collections from the previous five years of recordings of string quartets written by students he had taught through the Chickasaw Nation Young Composers Recording Project in his native Oklahoma.

At first, Howard-Phillips was skeptical. “I was like, ‘Hmmmm, students? I don’t know,’ ” she said. “But then I listened, and it was so obvious that not only were these kids very, very talented, but it was also thrilling to witness what a great teacher could nurture from them.”

All four pieces are fairly short. They vary wildly from each other. And each delivers a unique emotional impact.

Barrick was only 15 years old and couldn’t read music when she nervously played the first strains on her fiddle of “Caffeine Smile” for Tate. At the time, Tate devoted an hour a week to instructing youth at the Chickasaw Arts Academy. The song was about the feeling she got when she drank too much coffee in order to stay up late and play fiddle with her band.

Tate suggested Barrick create a musical foundation with other instruments to accompany her happy, energetic tune. Barrick’s “Caffeine Smile,” was professionally recorded by the award-winning Linden String Quartet in 2013. Several other students of Tate’s received the same honor.

In this month’s online issues of the Chickasaw Nation newsletter Canku Ota (Many Paths), Tate made it clear that “as a teacher and a coach I never wrote one note of their music… They deserve all the credit.”

The other works by students that the Spokane quartet will perform are Bennett’s “Holhchifo,” Ki’yo, Begaye’s “Circus Revolution,” and McAlester’s “Concerto for Strings.” All have been recorded and performed by professional musicians through the Chickasaw Nation Young Composers Recording Project.

Since her participation in the project, Barrick has graduated from Oklahoma City University with a bachelor’s degree in music business. She has been a featured artist on two compositions albums produced by a Grammy-winning record label. Live performances of her works range from locally in Oklahoma City to St. Petersburg, Russia. The now 23-year-old works as education coordinator for the Oklahoma City Philharmonic. She still composes, and plays her violin and fiddle.

That kind of success story is what drives Tate to guide Chickasaw youth through their own musical journeys. He told Canku Ota: “I think the (Chickasaw Arts Academy) is awesome and every American Indian tribe should strive to sponsor one.”

Sunday’s concert is akin to a celebration of the power of music to educate. “I’m so excited about this concert because it represents two of the things I’m really passionate about – music education for young people and celebrating and appreciating cultural diversity,” Howard-Phillips said.

The performance also will feature a visual arts element. Paintings by two established American Indian artists, Brent Greenwood and Billy Hensley, will be projected on a screen above the stage during the performances. The painters, also with very different styles, are from the same Chickasaw Nation area as the young composers whose work the quartet will showcase.

Howard-Phillips said that the painters expressed admiration that the Spokane String Quartet was giving native kids a wider audience by performing their works in Spokane.

“I am always looking to share new music,” Howard-Phillips said. “What struck me is how good these young students really are.”

For those who also enjoy traditional classical music, there is plenty left on the playbill. The musicians will perform one of the most popular works in the chamber music repertoire, Antonin Dvorak’s “American Quartet.” In keeping with the overall vibe, the quartet will also feature Charles Griffes’ “Two Sketches on Native American Themes.”